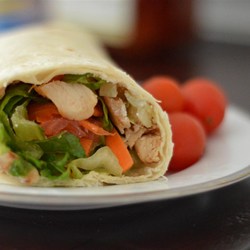 Posted by Linda C Wilson at 9:11 AM No comments:

One of my older recipes, this savory party bread recipe is from a lady in Raleigh, NC who shared it with Taste of Home in 1998. It is still a good choice for a party food.

Cut bread crosswise into 1-inch slices and within 1/2-inch of the bottom. Repeat the cuts in the opposite direction.

Cut the cheese into 1/4-inch slices and cut the slices into small pieces. Stick the cheese pieces into the cuts.

In a small bowl, mix the butter, green onions, and poppy seeds. Drizzle the mixture over the bread.

Wrap bread in foil and place on a baking sheet. Bake at 350 degrees for 15 minutes, unwrap and bake another 10 minutes or until the cheese is melted. 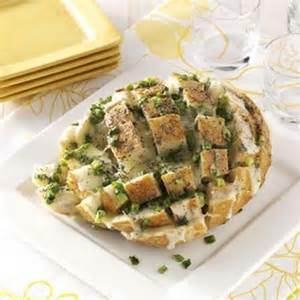 Note: This is a file photo.

Posted by Linda C Wilson at 9:36 AM No comments:

Sprinkle the salt and pepper over the pork chops.

Spray a large nonstick skillet with cooking spray and heat over medium heat. Add the chops and brown on both sides.

Add the corn, beans, salsa, water and cumin to the skillet; bring mixture to a boil. Reduce the heat and simmer 8 to 10 minutes until chops are cooked through or meat thermometer reads at least 145 degrees.

To serve, place chops on platter, spoon salsa over chops and sprinkle with the chopped cilantro. 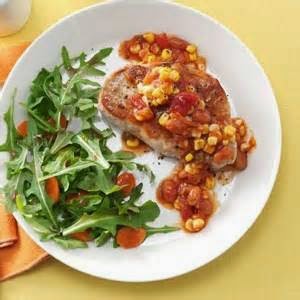 Note: This is my version of an old TOH recipe. The picture is from TOH.

Posted by Linda C Wilson at 9:12 AM No comments:

APPETIZER TURKEY MEATBALLS WITH A TANG

This recipe is for those of you who want more poultry recipes. You know I do not eat any poultry so I cannot vouch for this recipe. I do, however, have many family and friends who enjoy poultry and verify this is a good recipe.

Combine the bread crumbs, onion, and turkey in a large mixing bowl; mix together well.

Shape the turkey mixture into 1-inch size balls and place in the prepared baking dish.

In a small mixing bowl, combine the jelly and chili sauce; pour over the turkey balls. Cover with aluminum foil.

Bake at 350 degrees for 40 minutes. Remove foil and bake another 10 minutes. Be sure meat is no longer pink before serving! 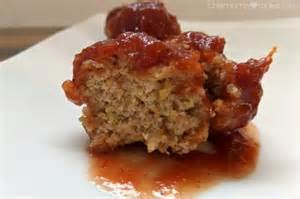 Posted by Linda C Wilson at 9:09 AM No comments:

Melt the butter in a skillet; add mushroom caps and saute.

Combine the mayonnaise, cheese, Dijon, parsley and onion powder in a bowl.

Beat egg whites until stiff; fold into the mayonnaise mixture. Stuff the mushroom caps with the mixture. 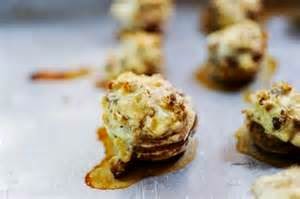 Note: This is a file photo.

Posted by Linda C Wilson at 7:17 PM No comments:

This is a quick and easy recipe I received from Kraft Foods a few years ago. 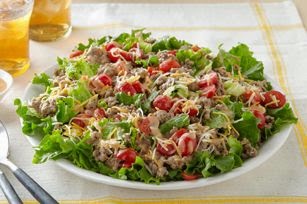 Posted by Linda C Wilson at 6:55 PM No comments:

I am putting this pie recipe on this blog because it is quick to fix. However, be aware it does need to be refrigerated for around 8 hours before cutting to serve. That is why I have titled it a make-ahead pie. This is a recipe I got from Mr. Food years ago.

In a large bowl, beat cream until stiff peaks form. Fold in sweetened condensed milk, jam, lemon juice and zest until combined. Fold in raspberries then pour mixture into crust.
Cover and chill 8 hours, or overnight until firm. Garnish with extra raspberries and lemon zest. Add a mint sprig for color, if desired.

Note: Leftovers must be keep refrigerated. 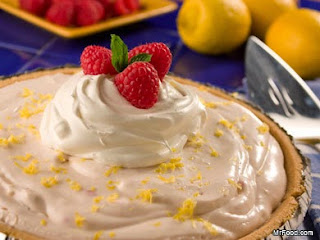 Read more at http://www.mrfood.com/Pie/Berry-Lemon-Pie#cSrwmbfD3S7XQxdo.99
Posted by Linda C Wilson at 10:11 AM No comments:

This recipe was shared by "The Quilting Hen and Antiques" in Montana.

In a large bowl, combine the chicken through onion.

Blend the mayonnaise and mustard together. Toss gently with the chicken mixture; cover and chill overnight or several hours.

Just before serving, toss the chow mein noodles with the chicken salad;

Line a pretty serving bowl with lettuce leaves and place salad in the bowl. 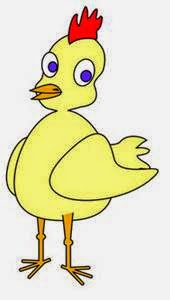 Posted by Linda C Wilson at 6:24 PM No comments:

Cook pasta according to package directions; drain in a colander.

While the pasta cooks, puree the peppers in a food processor; set aside.

Heat the oil in a nonstick skillet over medium heat; add the garlic and oregano. Cook while stirring for 30 seconds. Add the processed peppers to skillet, reduce the heat and cook slowly for 2-3 minutes; season with the salt and pepper.

Toss the rotini and sauce together to coat. Before serving, sprinkle with the cheese, if desired.

Garnish each serving with the fresh oregano, if using. 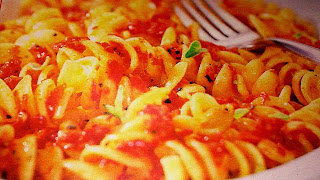 Posted by Linda C Wilson at 5:45 PM No comments:

This is a recipe from my daughter.

Combine all ingredients well. Put through a cookie press in 1/4-inch wide strips or roll out to 1/8-inch thick on a lightly floured board and cut into 1/4-inch wide strips 3 to 5-inches long. Place on an ungreased cookie sheet and bake at 375 degrees for 10 to 15 minutes.

Note: May be stored in a sealed container for several weeks. 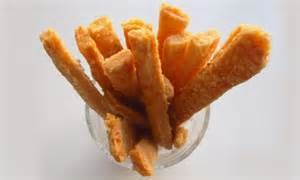 Whisk the flours, sugar, baking powder, baking soda, and salt together in a large bowl.

In a separate bowl, whisk the yogurt, egg, butter, and lemon peel until blended; add to the flour mixture and stir just until moistened. Gently fold in the blueberries.

Drop by tablespoonfuls onto the prepared baking sheet placing 1-inch apart. Bake at 400 degrees for 15-18 minutes or until lightly browned.

If desired, combine the glaze ingredients together in a small bowl until smooth and drizzle over the biscuits. 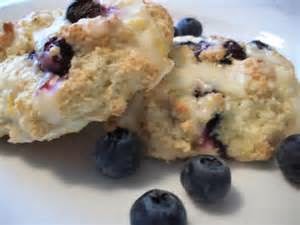 Posted by Linda C Wilson at 7:26 AM No comments:

I love pilaf, peas, and mushrooms so this is a favorite. I got this recipe somewhere in the past from a TOH magazine.

Prepare the pilaf according to the package directions.

In a large skillet, heat the butter over medium heat. Add the peas and mushrooms; cook while stirring for 6 to 8 minutes or until tender. Stir in the pilaf mix. 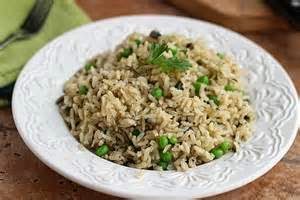 Discard (or save for another use) the seasoning packet with the noodles. Break noodles into small pieces and place in a large bowl.

Add the chicken, coleslaw mix, and green onions to the noodles. Drizzle the dressing over all and toss to coat. 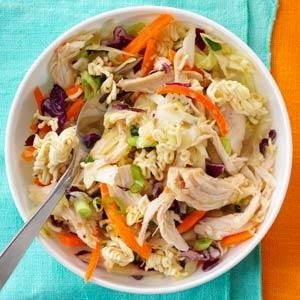 BERRY PARFAIT with YOGURT and GRANOLA


Layer 1/4 cup strawberries, 1/4 cup blueberries, 1/3 container yogurt, 1/3 tablespoon wheat germ, 1/3 of the sliced banana, and about 2 tablespoons of granola in a large bowl. Continue to build the parfait, repeating the layers until all of the ingredients are used completely. 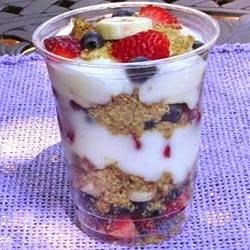 Posted by Linda C Wilson at 6:28 PM No comments:

Place oil in a small bowl.

Note: Fresh cauliflower may be used. Steam until tender then drain well and proceed as above. 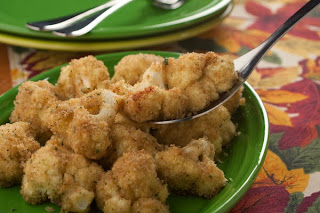 Posted by Linda C Wilson at 7:06 AM No comments:

Make shallow cuts in the franks at 1-inch intervals (Do not cut more than halfway through.)

Heat 1 tablespoon of the oil in a medium skillet over medium-high heat. Add franks and cook about 5 minutes until browned on all sides; remove from skillet and set aside.

To the same skillet add the remaining 2 tablespoons of oil, the potatoes, onion and bell pepper. Cook, stirring often, 10-12 minutes until the potatoes are browned. Stir in the sage, salt and pepper until well mixed.

Return franks to skillet and cook another 5 minutes, turning franks once. Sprinkle with the parsley before serving, if desired. 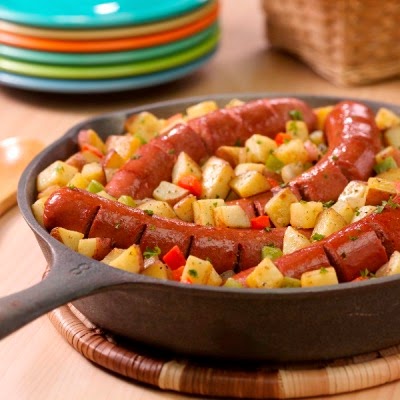 I do not do gluten-free per my doctors advice. But for those of you who do, this looks good.

If desired, drizzle the bread with some extra melted chocolate before serving.

Source: This recipe was developed and photographed exclusively for Nuts.com by Miryam Quinn Doblas, RD, of Eat Good 4 Life. 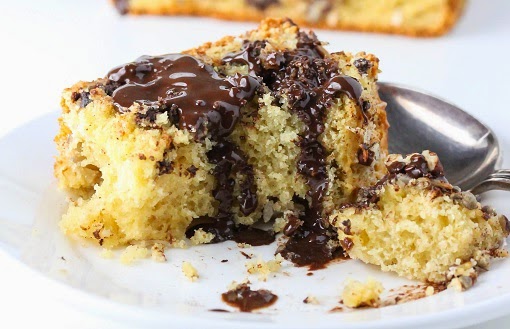 Posted by Linda C Wilson at 4:48 AM No comments:

Prepare vegetables according to package directions.

Meanwhile, heat 1 tablespoon of the oil in a large skillet over medium-high heat. Pour in the eggs and cook, stirring, until the eggs are thickened and no liquid egg remains. Remove from the pan.

In the same skillet, heat 2 tablespoon of the sesame oil over medium-high heat. Add the rice; cook and stir 10-12 minutes or until the rice begins to brown.

Stir in the chicken, salt and pepper; add eggs and vegetables. Heat through, breaking eggs into small pieces and stirring to combine. Drizzle with the remaining sesame oil. 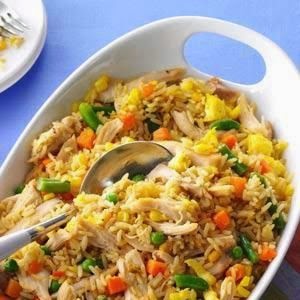 Posted by Linda C Wilson at 6:34 PM No comments:

Combine all ingredients in a jar with a tight-fitting lid. Shake, shake, shake until thoroughly combined. 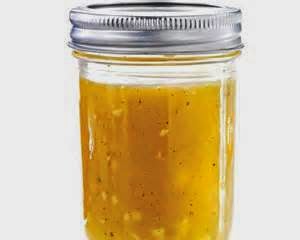